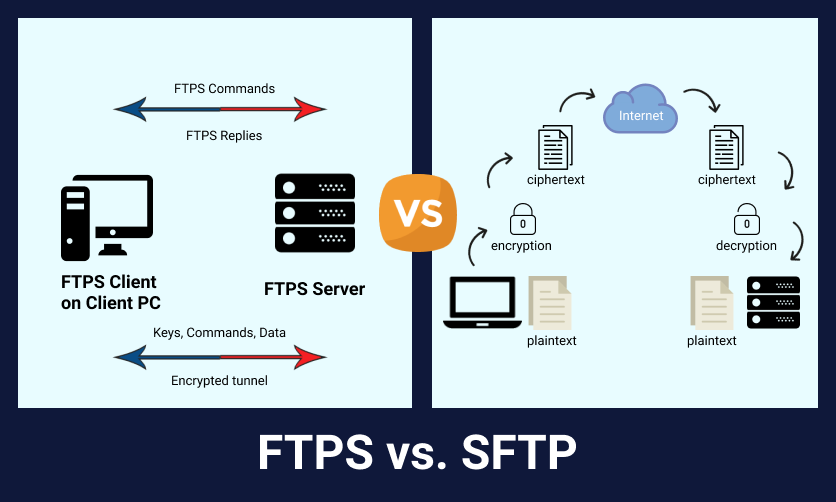 SFTP vs. FTPS: What is the Perfect Protocol for Safe FTP?

An increasing number of organizations are looking to move away from transferring data with FTP (a standard file transfer protocol). In the beginning stages of research, questions often arise around which secure transfer protocols are recommended and how those protocols differ from each other.

What is Secure FTP?

File Transfer Protocol (FTP) is a network protocol used to transfer files between clients and servers. Secure FTP takes the essential function of FTP – file transfer – and makes it more secure. FTP is not secure in and of itself, and it is often secured with SSL/TLS (to become FTPS) or replaced with SFTP (SSH File Transfer Protocol).

Secure File Transfer Protocols help you transfer data within and outside of your organization safe in the knowledge that your information is protected.

There are two mainstream protocols available for secure FTP:

Because SFTP and FTPS implement strong algorithms like AES and Triple DES to encrypt any data transferred, they both offer a high level of protection. SFTP and FTPS also support a wide variety of functionality with a broad command set for transferring and working with files.

Depending on your organization’s needs, either secure FTP option could work to secure your file transfers. However, there are a few notable differences between the two in how connections are authenticated and managed

While FTP is unencrypted, both SFTP and FTPS have encryption mechanisms in place.

Unlike both FTP and FTPS, SFTP uses only one connection. Both the authentication information (i.e., user ID and password) and the data being transferred are encrypted through SFTP.

With SFTP, a connection can be authenticated using a couple different techniques:

1. For basic authentication, you or your trading partner may just require a user ID and password to connect to the SFTP server.

It’s important to note that any user IDs and passwords supplied over the SFTP connection will be encrypted (this is a big advantage over standard FTP).

2. SSH keys can also be used to authenticate SFTP connections in addition to, or instead of, passwords.

With FTPS, a connection is authenticated using a user ID, password, and certificate:

Like SFTP, the usernames and passwords for FTPS connections are encrypted.

When it comes to ease of implementing SFTP or FTPS, SFTP is considered the easiest secure FTP protocol to implement. SFTP is very firewall friendly, needing a single port number (default of 22) to to be opened through the firewall. This single SFTP port will be used for all communications, including the initial authentication, any commands issued, and any data transferred.

FTPS, unfortunately, can be very difficult to patch through a tightly-secured firewall. FTPS uses multiple port numbers. The initial port number (default of 21) is used for authentication and passing any commands. However, every time a file transfer request (e.g. get or put) or directory listing request is made, another port number needs to be opened. You and your trading partners will therefore have to open a range of ports in your firewalls to allow for FTPS connections, which can put your network at risk and weaken your cybersecurity defenses.

SFTP and FTPS aren’t identical when it comes to which is faster. FTPS was designed to be speed-friendly: FTPS gives you the option of whether to encrypt both connections (the command channel and the data channel), or only the data channel. Because the control and data channel run asynchronously in two distinct connections, FTPS can achieve a high data transfer speed. However, SFTP is at most only slightly slower than FTPS.

Which is More Secure: SFTP or FTPS?

In summary, SFTP and FTPS are both secure FTP protocols with strong authentication options. Since SFTP is much easier to port through firewalls, however, we believe SFTP is the clear winner between the two.

OFTP2 or AS2 – which EDI protocol to use where?

Why AS2 is the optimal EDI communication protocol

The Advantages Of Using An EDI Value-Added Network (VAN)